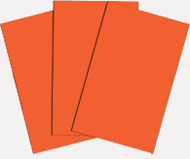 The Plate (cliché) is the carrier of the print image. For each new motif a new pad printing plate is needed. The print image is etched into or washed out of the cliché. The etching depth for steel clichés ranges between approx. 0.018 – 0.025mm, depend- ing on the type of application. As the pad can only transfer a limited quantity of ink, a deeper depth would not make sense. Given an etching depth of 0.025mm the pad only takes on approximately 0.012mm ink film; the rest remains in the depression of the pad printing plate. As the ink film is made up of about 40% thinner, which evaporates during transfer and drying on the print parts, a 0.008m ink layer will effectively remain on the print part.

Printing plates are available as :