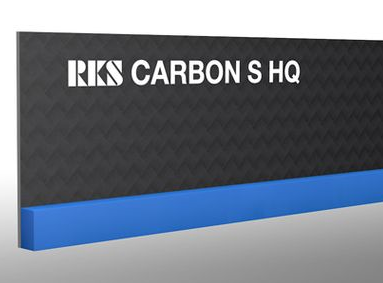 Carbon S (patented) the latest squeegee from RKS which means, this is an extension within the System Squeegee program.

The handling of this is similar to that of the well known RKS System Squeegee.

Characteristics differ in that Carbon S can be used in production situations were static build up is a problem, through use of carbon fibre the static build up reduced and/or diverted during the print run.

Another advantage is that the flexible/elasticity and the overall stability with the carbon squeegee is much improved.

Through this it is possible to produce a thinner and more flexible blade.

The Carbon S because of this is well suited for use with flat bed screen printing machines.

The up to 60 mm high Carbon S squeegee blades are mainly intend for mounting into a conventional squeegee holder with an aluminium shim.

Non-standard blade heights can be made on request.

For such heights the price of the next higher standard blade height will be calculated.
(e. g. a profile height70 mm = a price for the height of 95 mm)

The Carbon S is only available in the type 00, this means the CRP backing has an equal thickness through its height.

The squeegee is available in three different variations:

The maximum length of blade that we can offer at the moment is 2800 mm.

The maximum length of Carbon S HQ that we can offer at the moment is 2600 mm.

Precut lengths are available on request.

There are no reviews yet.

Be the first to review “RKS CARBON S” Cancel reply